Main Landing Gear for the Light Aircraft: Analysis and Design

Main Landing Gear for the Light Aircraft: Analysis and Design

Brief common information about the aircraft landing gears and detailed description of the analysis and design of the non-retractable simple landing gear typically installed on 700 kg MTOW Very Light Airplane. Analysis is performed using the energy balance equation for the Gear Spring plus Tire with definition of the Gear Spring deflections using non-linear FEM analysis on each iteration step.

What is Landing Gear?

The Landing Gear is a take-off and landing device designed to take loads which occurs during the airplane taxiing, take-off, landing, towing, etc.

What are landing gear configurations?

An Airplane with non-retractable landing gear

An Airplane with retractable landing gear

How does landing gear retract?

Typical landing gear retraction system utilizes pressurized hydraulic fluid (with electric servo-motors) to actuate linkages to raise and lower the gear. When the pilot turns a flight deck switch to the UP position, hydraulic fluid is directed into the gear up line. The fluid flows through valves to the gear actuating cylinders. A similar process occurs during gear extension. 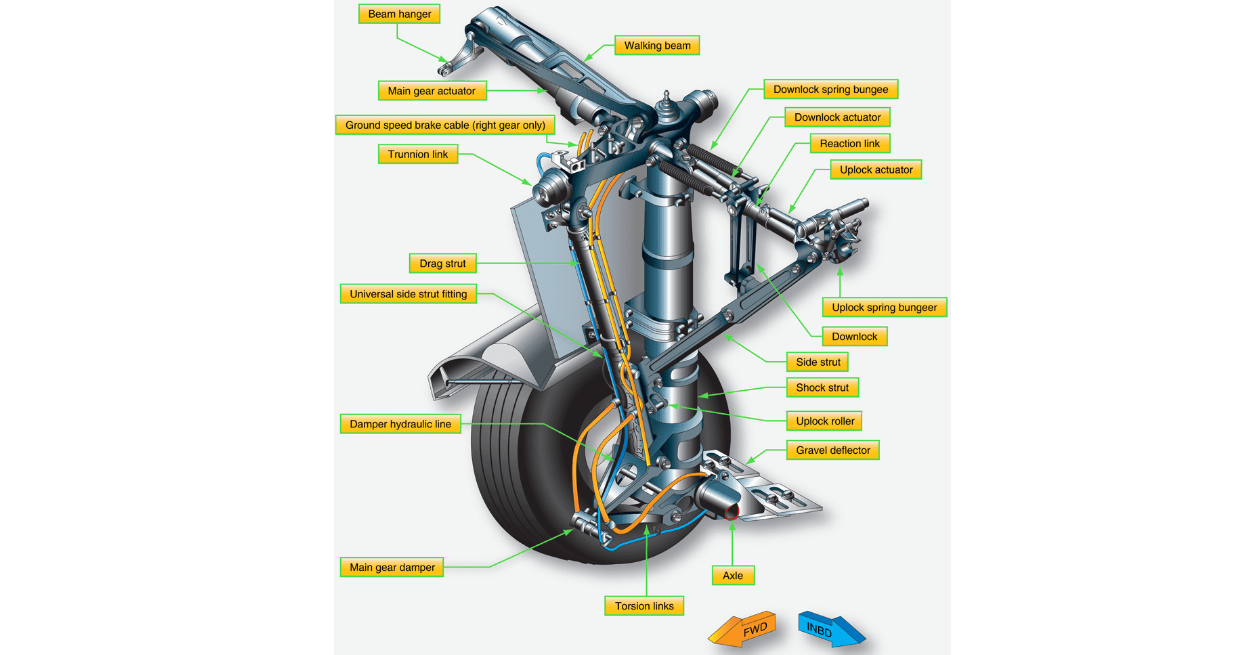 Figure above shows what Landing Gear retraction system is.

Take-off, Taxiing and Landing time takes approximately 1...2% of the total flight time. However, the main number of breakdowns and accidents (up to 60…70% from the total) falls precisely on this relatively short period. Especially dangerous regime is Landing: it counts up to 40…60% of the total number of aircraft accidents. In addition, the take-off and landing equipment have the significant mass from 4 to 6% of MTOW (Maximum take-off weight) of the whole airplane. As it is also noted in the article about Aerodynamics , – an airplane with retractable landing gear will have less Drag in the main flight modes than the one without this system. However, the mass of an airplane with a retractable landing gear, all other things being equal, will be greater than the mass of the one without the retraction system.

Thus it is obvious that for the large commercial airplanes flying on the altitudes up to 12000 meters and on the ranges up to 14 thousands kilometers, aerodynamics (less Drag) and fuel efficiency are critical, cost of complex retraction system design and manufacturing is acceptable in comparison with the other systems.

For the small airplanes (MTOW is equal or less than 8618 kg per CS 23 ) aerodynamics impact on the fuel efficiency is not so critical as for large commercial and transport category airplanes (regulated by CS 25 ) due to relatively low speed, flight altitudes and distances.

From the other side, the requirements for the light airplanes are more critical for the landing process itself: such aircraft should land on unprepared airfields, sometimes on farm fields or any unpaved relatively flat areas – so called “ bush planes ”: aircraft which developed to provide flight services to remote undeveloped areas such as the Alaskan tundra, Amazon rainforest, Canadian north etc. – so, to satisfy these requirements, these airplanes should have the extremely robust and reliable landing gear system.

As it was said above, for the light airplanes aerodynamics is not as critical as for their large “brothers”, cost of complicated system is, on the contrary, is more critical. As it is known by all engineers – as more parts your system consists of, as less it is reliable, thus non-retractable landing gear is a “gold standard” for the small aircraft design. Quest Kodiak 100, Vulcanair P-68, Tecnam P2002, Britten-Norman BN-2 Islander and many others are modern and successful confirmations of that rule.

Very light airplanes (up to 2 tons of MTOW) are often equipped with a spring landing gear, in which the spring serves as a shock absorber.

Design and Analysis of the Main Landing Gear Shock Absorber

As it was said above the Landing Gear serves to absorb and dissipate all the aircraft Kinetic Energy while landing. Landing Gear System is a Gear Spring plus Tire working at once as a Shock Absorbing system.

Thus the Energy Balance Equation in assumption that 100% of Kinetic energy is going to the Main Landing Gear and 0% to the Nose Gear, is:

Where:
m is an Airplane Mass (assumed as MTOW), kg

L = 2/3 for operational conditions or L=1 for max energy absorption, but in this case 1.2

Where:
y – vertical deflection of the tire axis, m

Max allowable Tire deformation work can be calculated as follows:

Total deformational work of the Main Landing Gear can be expressed by the following equation:

Where:
A Tire – Work of the Tire during its compression, N*m

A Spring – Work of the Spring deformation, N*m

Work of Tire deformations, according to [2] can be written as:

Gear Spring work (one side): 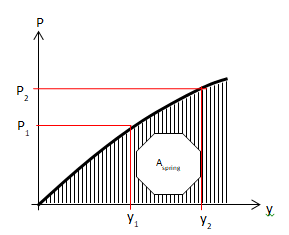 Finally, the Energy balance equation (*) can be written as follows:

from theoretical Force-Deformation curve from the Gear Spring geometrically nonlinear

As an example let us perform the non-linear FEM analysis for the simple landing gear of the Very Light Airplane with following parameters: 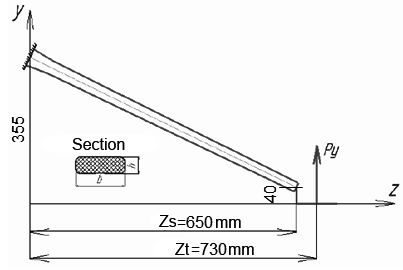 (this parameter is selected from the requirement that no one airplane part (propeller, attached cargo rack etc.) don’t have to touch the ground).

Conclusion: This landing Gear with selected Tire is Acceptable to use on a current 700 kg airplane. Max overload is 5.07.