From Ailerons to Flaps: The Main Stages of Design of an Aircraft Wing

From Ailerons to Flaps: The Main Stages of Design of an Aircraft Wing

The design of an aircraft, in particular, aircraft wing design, as well as the design of any unit or system, require from the engineer a creative approach in solving complex problems, ability to find and make optimal decision. Such work is unthinkable without deep understanding of the relationship between aircraft parameters and characteristics, good knowledge of aviation technology, understanding of stress analysis basics. The design should take into account the latest achievements in aerodynamics , structural design, technology and economy, aircraft operation.

Let us discuss the Design process on an example of the airplane Wing:

As any engineering student textbook says, the Airplane is an aircraft heavier than air, designed for flying in the atmosphere with the aid of propulsion system to create Thrust, and a stationary wing to create Lift. A fixed wing distinguishes an airplane from a flywheel (ornithopter) and a helicopter, and the presence of an engine – from the glider. The difference of an Airplane from the airship and aerostat is that the Airplane uses an aerodynamic method of creating Lift, – not the aerostatic.

So, the Wing is intended to create the Lift necessary for flight during the forward movement of the aircraft. Lift occurs from the pressure difference arising in the incoming airflow on the lower and upper surfaces of the wing: the pressure on the lower surface of the aircraft wing is greater than the pressure on its upper surface. See detailed explanation in the article about the aerodynamics , especially information about the Bernoulli’s principle and how does an airplane wing produce lift:

There are also the aerodynamic controls (ailerons, elevons, etc.), as well as wing mechanization - devices that serve to control the lift and drag of the aircraft (flaps, spoilers, etc.) mounted on the Wing. Typical Wing controls of the commercial airplane wing are shown below:

Wings are mostly constructed using aluminum but for the very light aircraft they can also be made using wood covered with fabric. Some aircraft wings are made of composite materials like carbon. The more modern aircraft is – the stronger and lighter materials are used. Wing Structure of the typical modern commercial airplane is shown below: 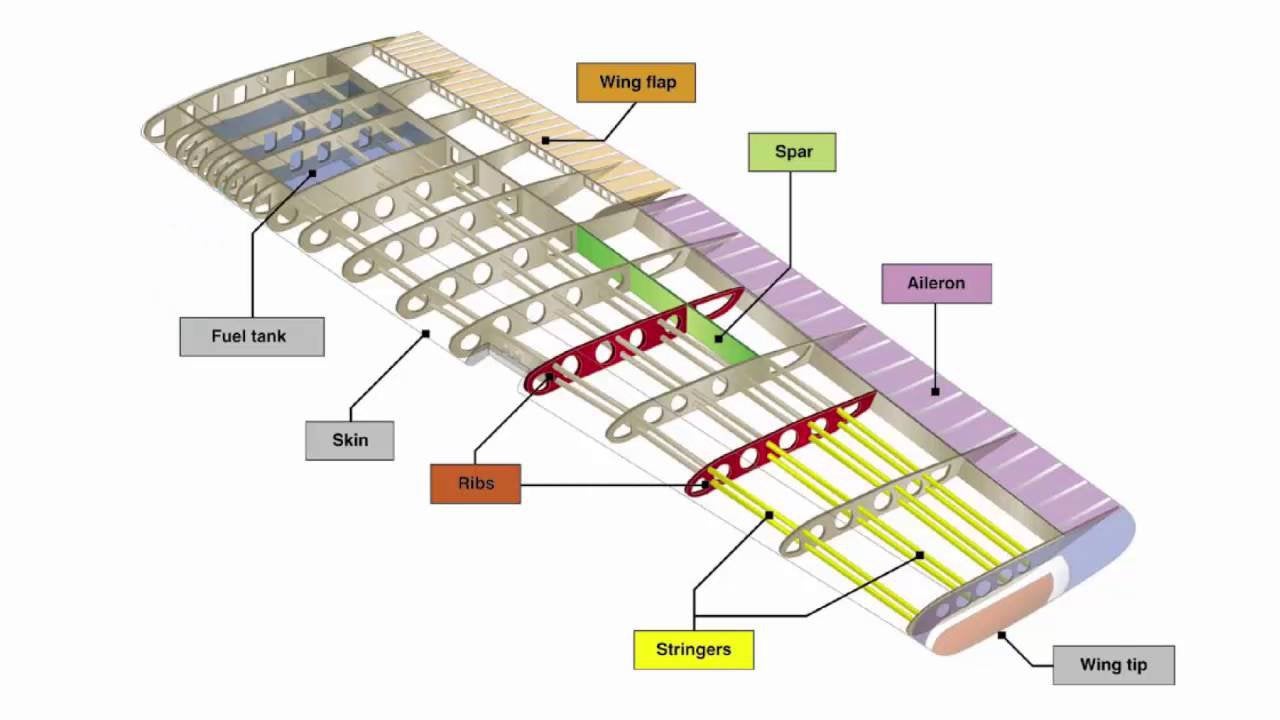 - In a fixed-wing aircraft, the Spar is often the main wing structural member. Spar is installed spanwise at right angles (or depending on wing sweep) to the fuselage. Purpose of the Spar is to carry flight loads and transfer them to the Fuselage.

- Stringer is a thin strip of material to which the Skin is fastened. Stringers are primarily responsible for transferring the aerodynamic loads acting on the skin onto the Ribs and Spars.

- The Skin on a wing is designed to carry part of the flight and ground loads in combination with the spars and ribs . Typically, Skin is stiffened with the Stringers .

In dependence on the airplane type and purpose it may have several types of wings. Let’s start from the very basic understanding that the only biplane or triplane has more than one wing (correspondingly, two or three), - monoplane has one wing with right or left (in aviation it is called Starboard or Port) consoles: 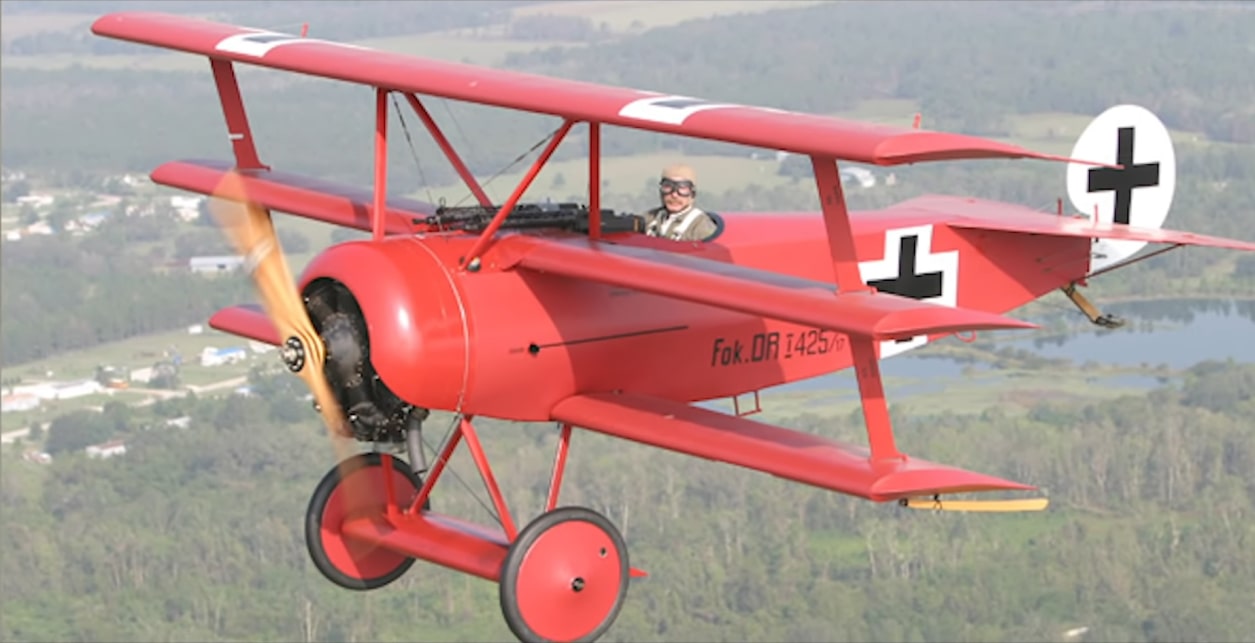 The desire to use many wing planes was a characteristic feature of the dawn of aviation - almost nothing was known about aerodynamics, and the first aircraft designers – almost always enthusiasts without serious education, tried such a way to increase the Lift. However, due to the increased drag, triplane aircraft quickly gave way to biplane and monoplane aircraft.

Biplanes are also have very high aerodynamic resistance (thrust) and the only few models are in operation nowadays, they are typically used for the agricultural needs and as close-range transports:

Antonov An-2 . One of the few biplanes in operation nowadays.

The most widely-used as commercial and military airplanes in present days now are the monoplanes:

Monoplanes. Three types of the most useful configurations.

Today, three types of monoplane are the most widely-used: high-wing (a), mid-wing (b) and low-wing (c). The high-wing scheme is typical for cargo planes, the mid-wing – for the military (fighter, bomber, attack aircraft), low-wing configuration is typically used for passenger commercial airliners and business-jets.

What is the best wing shape for an airplane?

Over the years of aviation countless wing shapes have been tried. Few of them have been successful. Sometimes (especially at the dawn of aviation) aircraft wings were derived from studying bird wing shapes:

Nowadays there are nine main types of Aircraft Wings:

1. Rectangular Wing. This is the simplest wing to manufacture. It is not tapered, straight with typical and repeating parts. It is mostly used for small aircrafts (up to 6 tons of Maximum take-off weight (MTOW). A good example of the modern airplane where a rectangular wing is used is Partenavia (Vulcanair) P68:

2. Elliptical Wing. The elliptical wing is aerodynamically most efficient because elliptical spanwise lift distribution induces the lowest possible drag. However, the manufacturability of this aircraft wing is poor, that’s why, despite all noted advantages, it is now unable to meet this wing configuration between modern airplanes. One of the most famous airplanes with an elliptical wing is Supermarine Spitfire:

3. Tapered Wing. This wing type was designed by modifying the rectangular wing with the aim to obtain the aerodynamic parameters close to elliptical configuration. Wing Chord is varied across the span for approximate elliptical lift distribution. See Cessna CitationJet 525 as an example of tapered wing usage:

4. Delta Wing. This wing type with low aspect ratio is used in supersonic aircraft design . The main advantage of this wing type is its efficiency in all flight modes (supersonic, subsonic, and transonic). In addition, this wing type has a large area for the shape thereby improving maneuverability and reducing wing loading. Dassault Mirage 2000 is a prime example of an aircraft which uses tailless delta wing:

5. Trapezoidal Wing. This configuration has an outstanding supersonic flight efficiency and has good stealth characteristics. The only problem is that the wing loading is high which results in reduced maneuverability. The trapezoidal wing is used in the famous F-22 Raptor jet:

that this wing is very complex in manufacturing. Aerospatiale BAC Concorde is the main representative:

7. Swept Back Wing. Leading edge of this wing is swept back to reduce the drag at transonic speeds. The majority of high-speed commercial aircrafts use swept back wings. Boeing 787 Dreamliner is a typical representative:

8. Forward-Swept Wing. Leading edge is swept forward. Due to controllability issues there are no commercial or military airplanes with such wing type. Typical representatives are Grumman X-29 Switch Blade and Sukhoi Su-47 Berkut:

How to design a wing?

- To obtain the shear forces and bending moments diagrams;

- To determine the cross-sections and locations of spars, stringers, ribs, repair access holes and hatches for them,

- To provide the layout for control system elements,

- To work out the issues of all structural elements alignment,

- To develop the drawings of a wing with all the dimensions required for manufacturing,

- To perform a strength analysis of the critical parts.

20-th century was extremely rich on new ideas: the mankind made a fantastic 50-th years trip from Wright Brothers Flyer-1 to modern supersonic stealth fighters. All main types of wings were tested on thousands of successful or unsuccessful airplanes. So, in the nearest future the engineers will be focused on fuel efficiency and being eco-friendly, modifying and upgrading the existing best practices.

Flying-V integrates the passenger cabin, cargo hold and fuel tanks in its wing structure. Because of its unique design, the engineers claim that it will be about 20% more efficient than the Airbus A350-900.